Born in 1980, James grew up in Dublin, leaving for Cork to attended Crawford College of Art and Design when he was 19. In 2010 James Graduated from a Masters degree course in Asthetics and the History of Art. Since leaving art school James has  worked soley in stone, mainly limestone and marble, exhibiting regularly both in Ireland and internationally.

“My sculptures are expressive, figurative and are recognisable by their over size hands and feet. I like to think of my work as a physical representation of an emotional response. It is not enough to create pretty things, My sculptures need to affect people, to tap in to something intangible while also being a powerful physical presence. Negative space within a sculpture allows it to inhabit, not invade the area it occupies” James Horan.

A notable trait in James’ sculpture is the use of  Marble(and other stone) in a very loose, sketch-like manner. The medium of the renaissance sculptors flippantly used to portray a fat man in his underwear, for example. The light-hearted nature of some of these expressive figures almost masks the dark humour at play.

His work is based on people, society and our environment. Humour plays a large part in his work; both in the ideas and the physique of the figures to make light of more serious ideas. Specific ideas in his work range from a mother holding her child to drunks fighting in the street, anything has the potential to inspire him to create a work of Art in his chosen medium. Sometimes an underlying theme can consume his practice for months at a time and a series of work can be produced, these are often serious themes; the recession, religion or his most recent series about war and mans obsession with power. 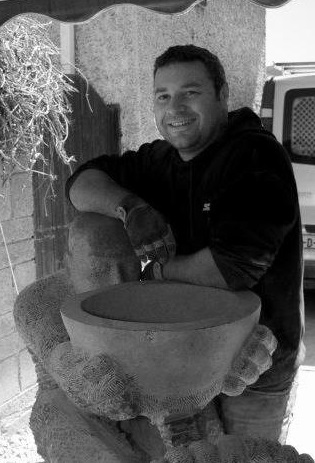